Dive into Science with the AltoCruz project

ICTs as a key tool in the scientific interpretation of heritage

This series is offered by researchers, science communicators and academic staff working together to bring you into closer contact with science. The “Dive into Science Week with UOC Researchers” series combines the UOC’s online expertise with the offline events organized for Science Week to create an online slow-reading experience. For Science Week 2017, we’ll share scientific knowledge on e-learning, eHealth, digital humanities, and ICTs in social science. Today we highlight the research on arts and humanities and the use of ICT through the AltoCruz project, partly financed by European funds through the EDER Consortium.

The use of graphic design techniques to improve the intelligibility of archaeological findings is as old as archaeological science itself. It has evolved at the same pace, according to the demands and needs of students of Heritage, with the techniques available at each historical point in time being the only restriction. 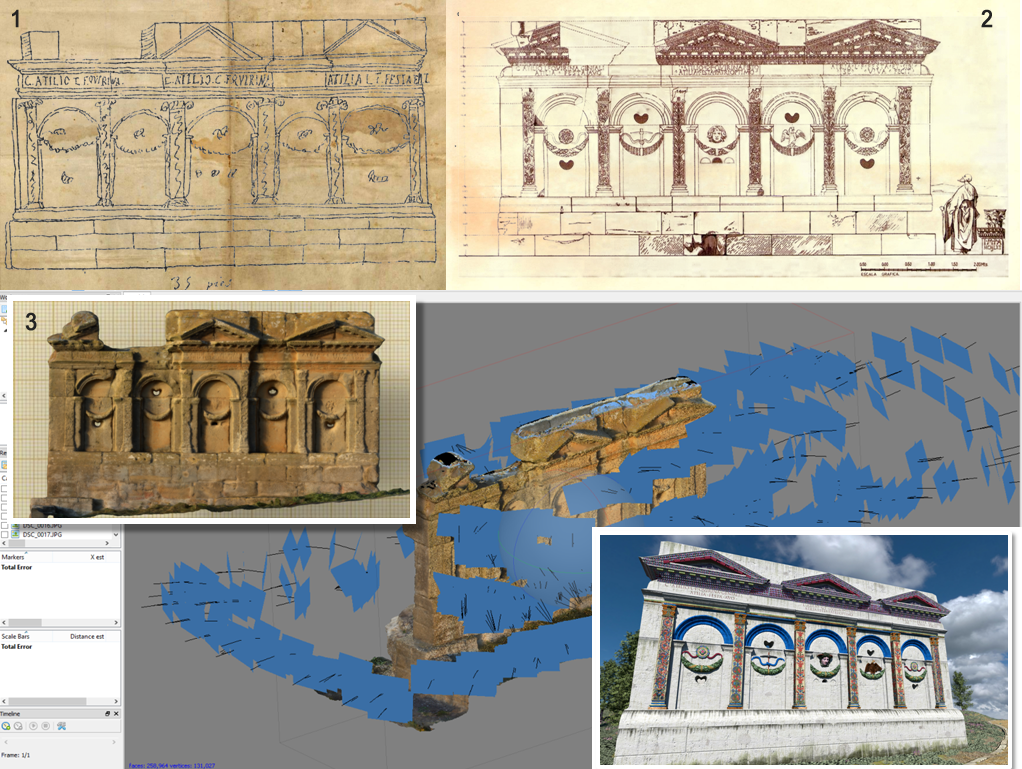 An example of the evolution of the graphic representation of the Mausoleum of the Atilii, or the “Altar of the Moors” (Sádaba, Zaragoza), based on the brief diagram sketched by Labaña in the sixteenth century (1), the interesting reconstruction by Menéndez Pidal in 1970 (2), and the photogrammetric recording and the 3D recreation produced in 2015 (3)

In recent decades, the development of three-dimensional graphic computing has provided archaeologists with an array of highly diverse tools that have complemented those they have traditionally used. The cost of equipment and applications has gradually fallen, the design is increasingly user-friendly, and open source free software packages have been developed. As a result, cultural media previously only available to large audiovisual production companies are now within reach of the often meagre budgets allocated to research and dissemination.

Graphic computing techniques are used in all stages of work. Some examples include:

In research, the three-dimensional geometric recording of findings (primarily photogrammetric recordings due to their limited cost) has massively increased opportunities for documentation, obtaining millions of measurements in a shorter amount of time than would be required for annotating a few measurements in a traditional sketch. Data dumping in geographic information systems (GIS) also facilitates processing by an accurate and comprehensive statistical medium.

The most significant impact is perhaps apparent in the area of dissemination, due to the predominantly visual nature of these techniques, as a result of new display devices (3D viewers, virtual reality, augmented reality), and above all, because of the almost exclusively visual nature of communication in our post-industrial information societies, meaning that the message must be adapted if it is to be conveyed to the public.

The use of immersive virtual reality techniques in tourism, like this example by the company Past View in Seville, provides significant added cultural value

The dangers involved in the indiscriminate use of these technologies in three areas have been discussed: technological snobbery (the superfluous use of technology with no clear objective), the inflation of information that becomes underused, and the production of aesthetically attractive materials which lack scientific rigour. This concern, which was encouraged by the European Centre for Innovation in Virtual Archaeology (INNOVA Centre), led to the London Charter of 2009 and its implementation in the Seville Principles of 2011 – an essential guide that should be followed when undertaking any virtual archaeology project. Establishing mechanisms to implement its recommendations for the standardization of procedures, communication of metadata, scientific transparency and evaluation is more expensive.

In any case, the disadvantages and dangers, which must be addressed and avoided, have been surpassed by the resulting benefits and advantages. Projects that involve an interdisciplinary team, entailing close collaboration between virtualization specialists and archaeologists or heritage experts, achieve a far higher profile and significance than those that do not. In times of straitened budgets, neither political nor academic bodies can afford to undertake projects that are restricted to the strictly academic sphere. They must focus part of their work on channelling knowledge towards their social environment, creating recognition which generates feedback that adds to the continuity of the work done through the public’s involvement (in what has been termed “the socialization of heritage”).

Without being exhaustive, there are many projects in Spain which all include the application of ICTs to heritage objects, while seeking different results:

The comprehensive documentation of excavation using photogrammetric models: pioneers like Luis Caballero Zoreda and Iñaki Koroso in applying this technique in the late 1990s and early 2000s alongside their traditional means of documentation. Today, projects are under way that dispense with traditional tools and generate all the information required using photogrammetric models, such as the Cerro Bilanero project, which combines aerial and terrestrial photogrammetry (Virtua Nostrum and Pablo Aparicio).

Initiatives aimed at technical standardization: these include the “historical evidence scale”, undertaken as part of the Byzantium 1200 project and adapted by Pablo Aparicio and César Figueiredo, which is gradually becoming more widely used. 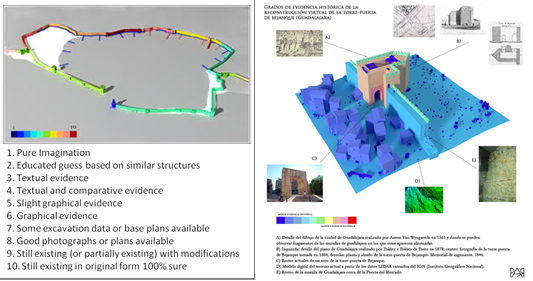 The scale of historical evidence applied to the Portus Theodosiacus for the Byzantium 1200 project, and the walls of Bejanque (Guadalajara) by Pablo Aparicio

Replicas using 3D printing: the potential provided by the new generations of printers is advancing in leaps and bounds, and they can even incorporate colour based on photographic textures. An example of this is the replica of the angel of San Miguel de Aralar Shrine, coordinated by the Museum of Navarre, as a complement to its comprehensive restoration.

Virtual museums: virtual exhibitions making it possible to view pieces which in some cases cannot be visited in a conventional museum as they are not on display, in 3D and in complete freedom. One prime example is the Sketchfab portal, for its hosting of 3D models, its excellent level of technical development, and its strong focus on this sector. There are major virtual exhibitions by leading museums (such as the British Museum) and monographic samples from a single site or area (such as Los Bañales or Cortes, in Navarra).

Applications enabling visits to sites, museums and exhibitions: the on-site potential has vastly increased, and it is now possible to improve the experience through more attractive interpretive video tours, more sophisticated interactive devices (touch screens, virtual reality glasses) and the visitor's own portable devices (augmented reality apps). Examples include the work done by the company Past View, with its tours that use “smartglasses” to give the visitor an immersive experience in various environments in several cities, or the new app for interpreting the sculptures in the forum of Torreparedones (Baena, Córdoba).

Facial reconstruction: undertaken with scientific criteria, based on the photogrammetric model of human remains and their forensic anthropological analysis. They are particularly interesting because of their social impact. They include the excellent work by the Brazilian Cícero Moraes.

Three-dimensional recording and facial reconstruction of a Peruvian mummy, based on forensic physical anthropology criteria, by Cícero Moraes

The project is coordinated by Cortes Town Council and the Universitat Oberta de Catalunya (UOC), and involves researchers from the UOC, the University of Barcelona (UB), the museography team (Queralt Suau Studio and Boixader & Go), the heritage digitalization team, the Government of Navarre for the management and restoration of materials, and a group of volunteers from the town of Cortes, providing dissemination services and acting as guides to the exhibition. The National Distance Education University (UNED Tudela) is also participating in the training for the exhibition's guides with the UOC. The exhibition is partly financed by European funds through the EDER Consortium.

Alto de la Cruz is a settlement dating from the first millennium BC, which is classified as a fortified oppidum and is located on the right bank of the Ebro River. Its urban structure shows that it was a population centre, and it controlled the organization of the territory in the region between the Bardenas Reales and Moncayo massifs. Its location, at the confluence of the Ebro and Huecha rivers, gave it a dominant position over the inhabitants and the production structures of the area. This predominance is reflected in the stratigraphic sequence, and in the types of furniture and construction. 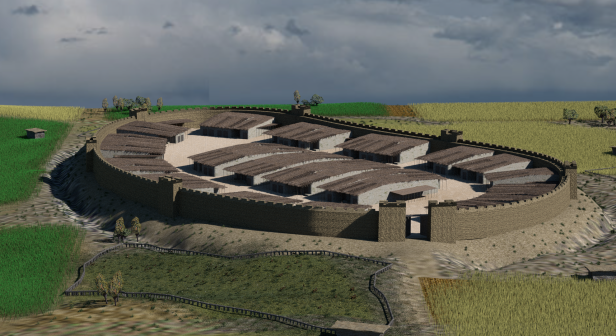 Virtual reconstruction of the fortified settlement of Alto de la Cruz (Cortes, Navarre) based on data from archaeological excavations and scientific research

The chronostratigraphic sequence of the Alto de la Cruz site covers a chronological period between the Bronze Age (around 1100 BC) and the second Iron Age (around 350 BC), and is crucial for studying the transition and the continuity of settlement between the indigenous substrate of the middle-late Bronze Age in the Ebro valley, and the communities that settled in the area at the end of the Bronze Age. 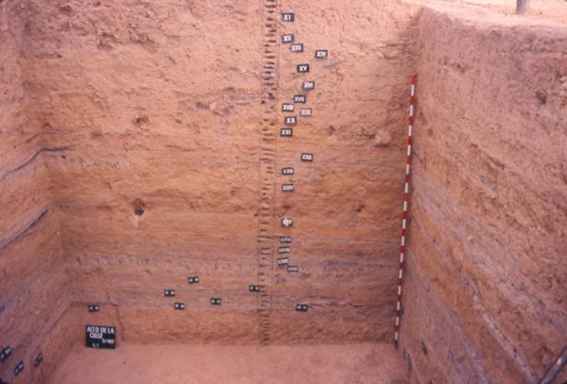 Complete chronostratigraphic sequence of Alto de la Cruz with data from the carbon-14 analysis: uninterrupted occupation between 1000 and 300 BC

The exhibition uses the idea of Alto de la Cruz as the key to European protohistory on the Iberian Peninsula as its main theme, covers all the topics related to the archaeological site (ways of life, commercial relationships, economic production, rituals, forms of burial, etc.). It also shows how research methodologies in the Iberian Peninsula have evolved since the mid-twentieth century. It provides the starting point for a series of projects linked to research, conservation, management and dissemination of the archaeological heritage of Alto de la Cruz that will take place in 2017 and in subsequent years.

One of the most important aspects in the project for the museumization, dissemination and investigation of the Alto de la Cruz site is the use and application of ICTs. Use and application are organized in several areas which are currently being worked on:

The creation of an Alto de la Cruz Virtual Museum in 3 dimensions, and a series of virtual recreations that make the findings and deductions more intelligible, meaning that when the data from the archaeological research is used, it is possible to physically and conceptually interpret all aspects related to the site. 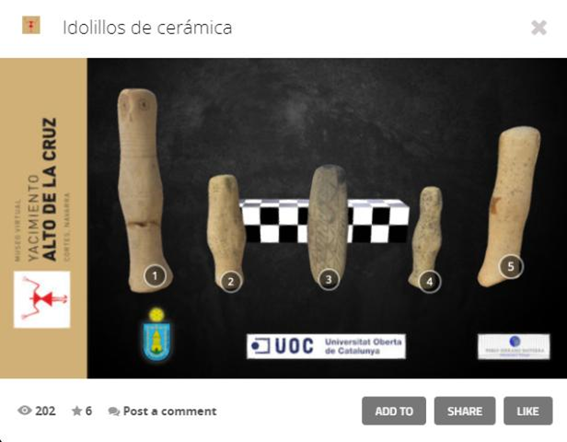 Several 3D virtual recreation models have been produced using the vast amount of data and studies available, with the maximum historical and archaeological rigour, and using photogrammetry data. Among other applications, these have been used to produce several sequences in the video that explains the central theme for the permanent exhibition.

The use of online resources Enables content about heritage to be included in the curricula of primary, secondary and upper secondary school students. From November 2017 to June 2019, we will be working with primary and secondary schools in Cortes, to roll out this experience in other schools in the area.

Through this brief overview of virtual tools that not only reconstruct and interpret archaeological heritage but enable its scientific and cultural dissemination, we have established some basic ideas that should be taken into account.

Several experiences and projects have been undertaken in this field, with different objectives. Among these objectives, scientific and cultural dissemination facilitates the positioning of these projects. In any project in which virtual tools are the central feature, good planning, management and establishment of priorities are necessary if full advantage is to be taken of the results. In particular, a good justification and relationship between the objectives and potential of the implementation of ICTs is fundamental (which also considers financial aspects). Among other advantages, a good project of this type enables reflection on and interpretation of the scientific data obtained at the archaeological sites. A good project also requires good interdisciplinary work and a team of researchers from various fields: researchers, specialists in virtual resources, museographers, etc.

By Gloria Munilla and Pablo Serrano.