Science under debate in cinema 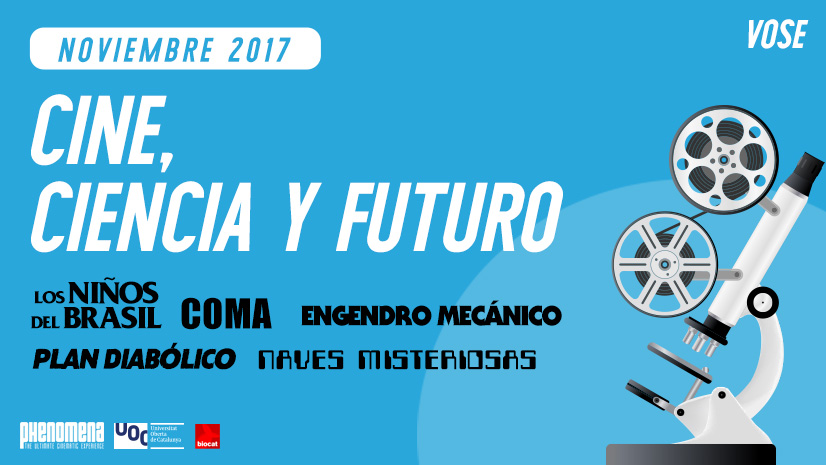 The UOC, Phenomena and Biocat have scheduled a cycle of science fiction films and debates with scientists and film critics

Will artificial intelligence dominate the future? What consequences might genetic experiments have? These and other questions that scientists ask each other every day have also been the focus of the screenplays of the most controversial classic science fiction films in the history of cinema. Some of these films feature in the Cinema, Science and Future cycle organized by the UOC, Phenomena and Biocat at Barcelona's Sala Phenomena throughout November to coincide with Science Week. The cycle includes five fantasy film sessions followed by a discussion between expert scientists in each subject and film critics.

The film sessions will be moderated by Jordi Sánchez-Navarro, director of the Faculty of Information and Communication Sciences at the UOC and of the UOC-certified Master’s Degree in Contemporary Fiction and Fantasy Film (UOC, Sitges Festival Internacional de Cinema Fantàstic de Catalunya). In each session, a film critic and an expert scientist in the subject of each film will be taking part with the aim of generating an open debate with the audience and of looking more closely at the issues posed by the film. Biocat, the agency that promotes the life and health sciences sector in Catalonia with the aim of transforming knowledge and technology into economic growth and social impact, has led the selection of the scientists and the topics.

Pastora Martínez, UOC Vice President for Globalization and Cooperation, explains that this cycle is a product of the University’s global and social strategy for building bridges between different disciplines, taking science outside academic institutions and contributing to expanding the public’s scientific knowledge. The aim, states the vice president, is to “promote open knowledge with everyone and for everyone, create spaces with different actors in society, reinforcing the social impact of the UOC”.

“The cinema is a fantastic excuse to go from science to fiction and arouse the general public’s interest in research into health, a sphere in which Catalonia is an international leader,” highlights Marta Soler, Head of Scientific Research and Debate at Biocat. “The presence of scientists at the sessions will bring rigour to the debate and raise the profile of the excellent research being conducted in Catalonia”.

The sessions will be held at the Phenomena cinema in Barcelona (Sant Antoni Maria Claret, 168), which has selected the films to be screened. The cinema was opened in 2014, recovering some of the most iconic and popular titles in the history of cinema. Its programme combines great classics, premières, unscreened films, themed seasons and double bills.

Genetic experiments at the hands of Nazi doctor Josef Mengele reveal a sinister plan in this thriller, based on the novel by Ira Levin. A starting point to debate genetic engineering, biosciences and ethical scientific practice, with the participation of Cristina Fillat, researcher at the August Pi i Sunyer Biomedical Research Institute (IDIBAPS) and expert in gene therapy, and Pep Prieto, critic and writer.

Writer Michael Crichton directs this story set in a hospital where some of the patients fall into a coma after apparently simple operations. A film that will lead to discussion on ethics in medical practice with specialist internal medicine doctor and expert in bioethics Ferran Masanès, from Hospital Clínic, and Violeta Kovacsics, doctoral degree holder in Audiovisual Communication.

Artificial intelligence will take a disturbing turn when a computer tries to experience human desires. Actress Julie Christie will pay the consequences of the experiment. A story that will lead to the conversation with Ricard Solé, research expert in synthetic biology at Pompeu Fabra University, and Àngel Sala, director of the Sitges Festival Internacional de Cinema Fantàstic de Catalunya.

The music of Joan Baez accompanies the lone astronaut who is keeping the last specimens of earthly flora alive on a spaceship. After the film there will be a discussion with Francesc Godia, a biotechnology expert at Autonomous University of Barcelona, and film critic Desirée de Fez.

The film is an expressionist mix of horror, thriller and science fiction about the obsession with eternal youth and blind faith in the ability of medical science to achieve it. The discussion that will end this session will be with Ignacio Morgado, research expert in psychobiology at the Universitat Autònoma de Barcelona, and Ivan Pintor, screenwriter and teacher.

Tickets for the sessions can be bought online or at the Sala Phenomena box office.