"Philosophy is also a fight against everything that stops us thinking" 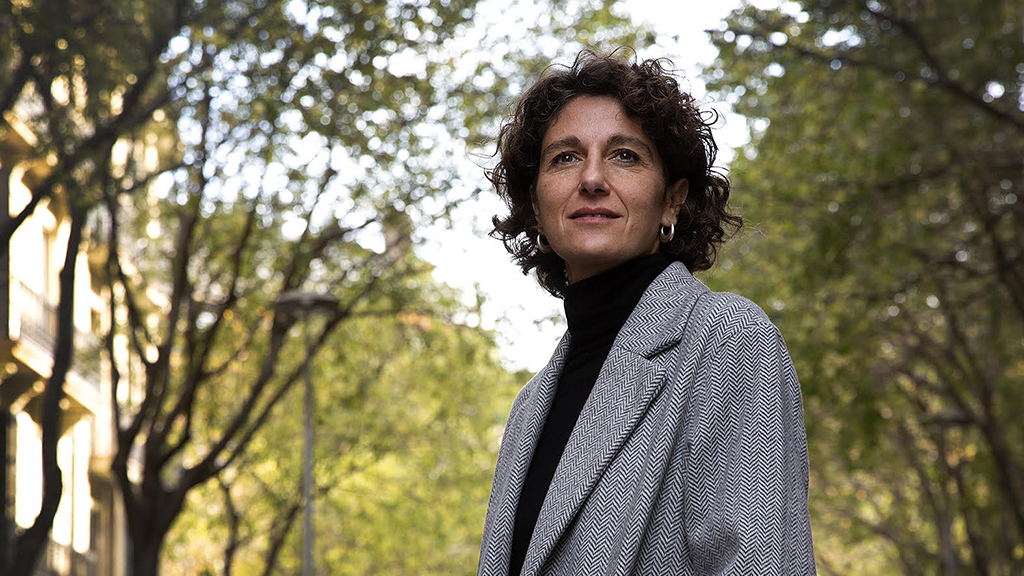 Marina Garcés, director of the UOC's Master's Degree in Philosophy for Contemporary Challenges, used the interview to explain the objectives of MUSSOL, a new philosophy research group that she is coordinating. (photo: Ruth Marigot)

Marina Garcés, director of the UOC's Master's Degree in Philosophy for Contemporary Challenges, used the interview to explain the objectives of MUSSOL, a new philosophy research group that she is coordinating. (photo: Ruth Marigot)

21/01/2021
Jordi Benavente
Marina Garcés, professor on the Master's Degree in Philosophy for Contemporary Challenges (UOC) and coordinator of the MUSSOL research group

When not philosophizing in the classroom, in the library or from her writing desk, Marina Garcés (Barcelona, 1973) is not afraid to take her craft to the streets and put herself out there. The fight against credulity used to be "revolutionary", she said in Nova il·lustració radical (Anagrama), and now it is "necessary". The interests of all of us are in dispute "with the interests of contemporary capitalism", she affirmed. And, moreover, our condition is already "posthumous": between human beings and nature all that remains to be seen is "who is going to destroy whom". Nonetheless, she imagines the enlightened, radical resistance to be like a task carried out by "rebellious weavers who are both sceptical and trusting". She has just published Escola d'aprenents (Galàxia Gutenberg), but this is far from her first work. Previous publications include Ciutat Princesa (Galàxia Gutenberg), Fora de classe (Arcàdia) and the abovementioned title published by Anagrama. She is the coordinator of MUSSOL, a new research group focusing on philosophy for contemporary challenges, which addresses the idea of the need to "continue to think", as posed by Diderot in the 18th century, and brings it into the 21st century, so as to "combine research" and "encourage exchanges, seminars and debates both nationally and internationally".

What is the first thing you said to the members of MUSSOL?

The first thing I said to them was that all the bureaucracy involved in creating a group like this only makes sense, in my opinion, because I am excited to work with them and to collaborate in trying to find what really moves us and concerns us. This is not rhetoric; finding enthusiastic colleagues is a real stroke of luck and it is quite exceptional. I think that the group of people who have gradually appeared in connection with the Master's Degree in Philosophy for Contemporary Challenges has the advantage of having led lives and journeyed intellectually in various unorthodox ways, so it will be great to put some of our journeys into a joint orbit. I for one am interested in this, and going by everyone's replies, I think that all the others are interested too. So, the motivation lies more in the desire, the intrigue and eagerness, than in the material and institutional support, since virtually everywhere research is forced to confront a precarious reality.  It is a situation that pains me, and one that we also need to make explicit. In our country, we have excellent professors and researchers who more than know their way around but are in difficult situations.

Is the name of the group, MUSSOL (which means 'owl' in Catalan), a metaphor for the commitment to keeping watch whilst everyone is sleeping?

The owl is the bird that traditionally accompanies Athena, who is the goddess of wisdom, but also of war, and in Western culture this bird has been considered to be the symbol of philosophy. On my nineteenth birthday, during the first year of my degree programme, my university friends gave me a metal owl and it has accompanied me ever since. The owl's eyes are open at night, it keeps watch whilst everyone is asleep, takes flight when life retreats and defies darkness. Now we are going through a dark period, because we find it hard to read the present or imagine the future. Invoking the figure of the owl is an invitation to "take back the night", so to speak.

To take back the night and keep watch, against which enemy?

The reference to Athena reminds us that wisdom and war are linked.  Philosophy is also a fight against everything that stops us thinking: dogmatisms, truisms, closed systems, fear, punishment, stupidity, etc. These are elements in human societies that are now taking on a new face, but they have always been there.  At present, authoritarianism is being reinforced, taking the form of populism, of strong leaderships, new conservatisms, and so on, but there is also an authoritarianism of productivity, results, immediatism and bureaucracy.  In academia, this second form of authoritarianism is particularly serious and is squeezing the margins of thought. I am not just referring to the margin of existence of the humanities or philosophy. I am also referring to the possibility of making a science that doubts, listens and creates bold lines of research.

Should the members of MUSSOL be "rebellious, sceptical and trusting at the same time" like the enlightened radical weavers in your essay?

One of the things that scare me most in life is people who stopped  asking questions, in other words, who have lost their curiosity for things they don't know, their concern about things that are not easy, and their desire to find things that are unusual. I think that those of us in the MUSSOL research group share these desires. I don't know whether they are virtues. They may make our life more difficult, but for me they are the condition required for the type of thinking that is not simply devoted to reproducing formulae.

You wrote that "the interests of all of us are in dispute with the interests of contemporary capitalism". A categorical sentence that reminds me of what Bukowski said, that "capitalism has survived communism" and "now, it eats away at itself" (meaning: it devours us).

We are experiencing predatory capitalism. Beyond the creative destruction that Marx spoke of, what we have now is predation and devastation. The environmental aspects of this are clear. Now, we also have the health situation, but I think that this is also happening in the subjective, affective and relational dimensions of the social beings that we are.  Capitalism today no longer works based on a promise (of a better life, although it is unevenly better), but on the fear of "being left out". Left out of the game, left out of the country or the town where you live, left out of the house (literally), left out of the increasingly small window of opportunities that society has become. This makes us servile and directs our action towards some type of "at least": at least I have work, even though I'm badly paid; at least I have a house, even if it is at an exorbitant price; at least they are going to school, even though we don't know what they are learning there, etc.

In your writing you support interdisciplinarity.  Does MUSSOL support it too?

Both the Master's Degree in Philosophy and the MUSSOL research group view philosophy as a crossroads of the known and the yet to be known. Philosophy deals with everything. There is no philosophical discourse in a football stadium, but rather where different roads intersect. Therefore, more than interdisciplinarity in the sense of adding or mixing disciplines, I believe in the work of knowing and thinking based on common problems. The key lies in knowing how to create them beyond individual languages.

You said, "Now there is no cry, just a silence that hurts", a "worrying silence". So, will MUSSOL also address society, then?

We are also thinking about carrying out our collective work at the crossroads between the academic, cultural and social environments. We don't believe in the self-referencing of the academic system and understand that universities are social institutions that arise from the societies to which they belong. Not only should they offer society results, but also ways of being able to think about itself, in conflict and tension with the common problems of its time. Universities must aspire not only to creating, but also to sharing the boldest forms of knowledge and reflection and to do this in collaboration and dialogue with other voices and experience environments. The insular nature of universities has created an abyss that impoverishes society but which, above all, sterilizes academic life. Therefore, the first project we shall launch is called "Ecologies of the imagination" and it aims to study, both in theory and practice, how philosophy can contribute today to cultural action and to educational and social transformation.

Paraphrasing Adorno, you also wrote that "to cure we must uncover, to think we must let people shout". What do we need to uncover, what is ill?

In El Pressentiment, Espai en Blanc's last large project, we said years ago that we were "ill with normality"… Now we don't know whether we want to return to that normality that made us ill or else really to support research into new personal and collective ways of life.  We have reached a point at which it is so hard to imagine a hopeful future that the most immediate past seems glorious. However, it is precisely that past, the ways in which we used to produce, consume, work, etc., that brought us to where we are today. We are scared of catching COVID-19, but we are even more scared of confronting the real causes of this disease.

Is Espai en Blanc's collective thinking project still ongoing? Will they share their experiences with the members of MUSSOL?

Yes, for years now Espai en Blanc's lifeblood has been El Pressentiment, a one-page publication, a combination of a poster and a leaflet, somewhere between a graphic composition and an aphorism.  It is a new way of inhabiting the empty space between the formatted discourses that we are continually bombarded with, by the media, academia, the cultural industry, common sense, etc. We have always said, "a little bit of impossible or I'll suffocate", and the way we have experienced it is in opening up holes, interruptions and diversions where we can meet. Now, the pandemic has moved us away from this area of constant experimentation, friendly relations and open meetings… This is what I miss most right now.

When was the last time that you really put yourself out there?

The last time I felt in danger in the face of power was before Judge Marchena! However, beyond that anecdote, paradoxically, I think that when we truly all put ourselves out there was during the lockdown and partial lockdowns. It's a paradox. Our bodies imprisoned at home, forced not to touch others, to be far from our loved ones and people we don't know, are undergoing a test of political resistance, a collective action of reciprocal healing in the form of individual isolation that we could never had imagined. I believe it is interesting to think about this moment in this way, more than the expression of passive, arbitrary obedience.  How we get out of it is quite another matter. Will we forget that distancing has been a way of looking after others? Will fear win over solidarity? These questions frighten me quite a lot.

The UOC's research and innovation (R&I) are helping 21st-century global societies to overcome pressing challenges by studying the interactions between ICT and human activity, with a specific focus on e-learning and e-health. Over 400 researchers and 50 research groups work among the University's seven faculties and two research centres: the Internet Interdisciplinary Institute (IN3) and the eHealth Center (eHC).